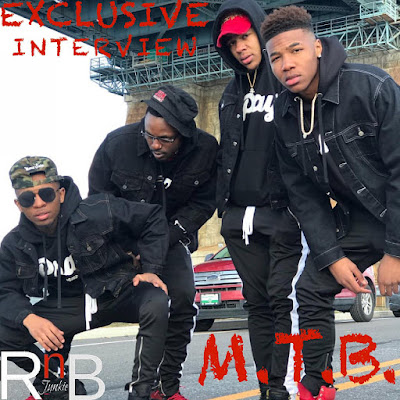 M.T.B. (Meant To Be) is an R&B singing group from Philadelphia consisting of Dash, Mire, Devonttae (Tae), and Rizzy. These 2x’s Philly Hip Hop Award winners have had the opportunity of sharing the same stage as of June’s Diary, Day 26, and Brandy. RnB Junkie recently had a chance to interview R&B’s newest heartthrobs M.T.B. We had the pleasure of discussing the meaning of their name, favorite artists, work ethic and discipline, balancing between personal life and business, plus more! M.T.B. is proving that they’re destined for greatness and that their future is Meant To Be! Check out our interview with M.T.B. below and be sure to follow them on all forms of social media!


Can you share with us the meaning behind your name M.T.B?

Mire: The meaning of the name stands for Meant To Be.

Devonttae: We came up with the name basically by how everything fell into place. Like nobody was expecting us to meet each other, like know each other but the way we met each other and came to be a group, it was just like Meant To Be. We just felt like it should be the name of the group.


Being that you are Philly natives, who are some of your favorite Philly artists?

Rizzy: I don’t really know about any Philly artists I really like. I can’t speak for everyone, but artists in general, we listen to people like Chris Brown, Tank, and Jazmine Sullivan. We also listen to boy groups, so Boyz II Men they’re from here, Az Yet, New Edition. Those are some of our inspirations and people we really take after.


You guys are fairly young and have a great work ethic. Can you speak about the discipline it takes working in the music industry?

Devonttae: It takes a lot of discipline because by us being young, we still want to be young. We do a lot of music, and we’ve been doing a lot of business, but most of us have been doing this since we were younger, even younger than what we are now. We still got to remember how to discipline ourselves. We might want to go with our friends one day, but we got to be working hard because we got goals and got to get it.

Rizzy: Once we can get into the industry and things of that nature, it’s different. It’s like really no days off. This is our time to work, make sure you’re in the studio, get songs done, got to practice, be on point, get your body in shape, condition yourself. You know you got to look a certain way. We all got to look right, we all got to stand right, so we got to build our chemistry up. It’s a lot; it’s a lot of hard work.

Social media has created a desire for fans to want to know the ins and outs of the lives of their favorite artists. Do you guys ever find it difficult on how much of your personal lives you’re willing to share with your fans?

Devonttae: Me personally, yeah sometimes. Cause like you want to keep your personal life and your business life separate, but it’s hard when you’re in this industry, so we just got to maneuver how it comes. If you find about my life, you find out. There’s nothing to hide, I’m speaking for me and my brothers, we just trying to get it.

Rizzy: So, we don’t really monitor, we’re cautious is what I am trying to say. That’s all. We just take precaution to make sure we’re not doing stupid stuff or anything that would make us look a certain kind of way. We just do the right thing.

Do you guys feel any pressure being compared to iconic groups that came before you such as Immature and B2K?

Mire: No not really

Devonttae: A little bit sometimes, but I know we got it. I know we’re talented enough to do the things. It’s just pressure because nobody believes in boy groups anymore. We’re like that boy group that got to make everybody believe in it again. So we have a lot of weight on our back, but it ’s not nothing that we can’t do, so I know that we’re going to do it! Sometimes you feel the pressure; sometimes you shake it off.

The harder you work, the dream is going to come.

Devonttae: We got to work with some really amazing people like Ms. Shanelle, Avery, and her whole team. They basically came to us and brought a song and a project to us, and we had to jump on it and give that M.T.B. flavor, you know what I’m saying. It was an amazing process though because it was kind of like our first time being connected to Shanelle. It was just nice to see everything fall into place, and she’s been part of our team ever since.

Rizzy: ‘R&B Song’ being as though we didn’t write that particular song on our album, but we had to basically live with it and listen to the song. What I got from the song, it’s basically sugarcoating the way in saying you trying to get with a girl [laughs]. She going to like it like her favorite R&B song basically.

What can the fans expect from M.T.B in the coming months?

Rizzy: They're going to expect that energy. That hype, that fun, that real music. Stuff that they want to listen to every day throw it on repeat that’s what they can expect us. Songs that they can bounce to, songs that they want to play every day at their parties, and in the morning when they wake up to get ready for school or wherever they’re going school or work, just expect that vibe. That’s what you going to get from our songs, that vibe.

Before we wrap up this interview, I wanted to ask each of you guys to name one thing that you believe is meant to be.

Rizzy: M.T.B. me and my boys is Meant To Be, that’s what I am going to say

Devonttae: What I think is meant is like our future is meant to be. We’re destined for greatness. I feel like that’s what's meant to be.

How can everyone reach you guys on social media?

On behalf of 'RnB Junkie Official,' I would like to thank you guys for the opportunity to interview you.