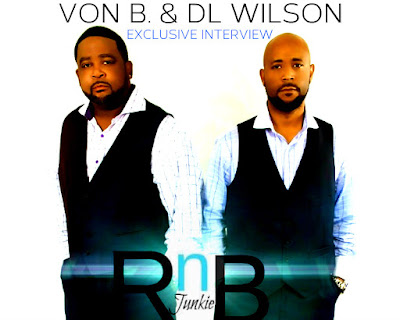 Indie R&B/Soul Singers, Songwriters and Recording Artists in their own right, Von B. & DL Wilson joined forces to create the duo Von B. & DL Wilson. Raised in South Bend, In. Both members were part of a High School R&B singing group that made a name for themselves on the local scene. From talent show victories, local news interviews and TV show performances, they were more than just average high school students. Major R&B recording artists such as the DUO/Group MEN AT LARGE, Lil JOE (of The Rude Boys) and the late, great Gerald Levert were a few artists that offered a positive influence, great advice and the opportunity to perform. Earlier in the year they released their debut single "She's Unbelievable" and followed it up with the current single "Mr. DJ Stole My Girl". I caught up with the duo to discuss their debut album Von B. And DL Wilson Presents, their Formation, Sound, Musical Influences, Recording Process, Independence as Artists and much more...

TERRANCE: First, can you tell us how and when Von B. & DL Wilson formed and what the journey from then to now has been like?


VON B: We officially became a DUO in 2016 and the journey has been life-like. By that we mean, anyone can set a goal but not everyone is able to overcome adversity and still accomplish it! We have always been on the same page with good communication, a strong brotherhood, understanding, being teammates etc. but we both overcame a lot outside of the Duo in order be at this very moment! We hope the listeners can feel the ‘vibe’ our music creates.

TERRANCE: When did you both discover your love of music and wanted to be musical artists?
DL WILSON: Early! (laughs)…we grew up in houses that played all the Motown Urban/R&B/Soul greats, Jazz and Gospel music and artists! We took it seriously when we became members of a 5-man high school singing group that became popular in our hometown. Starting with practice, performances at local events, interviewed on multiple news stations, studio recording and being special guests on a Saturday morning kid’s television show, we became serious in developing our craft.

TERRANCE: How would you describe your sound? 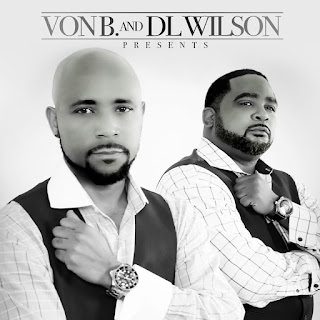 VON B. & DL WILSON: We both individually had uncle’s first name Clarence in a five member, 1960’s R&B/Soul singing group named The ENCOS. The ENCOS started out, just as Von B and DL Wilson’s 5 member group did, local in South Bend, In. Their uncle’s group went on to become one of the HOTTEST acts in the Midwest area! The ENCOS traveled the UK as well performing overseas and sharing the stage with the legendary group and Rock & Roll Hall of Famers THE TEMPTATIONS and The God-Father of Soul the late, great JAMES BROWN. In addition, they also performed with JR. WALKER AND THE ALL-STARS (another South Bend, In. native band) that went all the way to the top of the Billboard Hot 100 charts in 1965 with their hit ‘Shotgun’ written by Jr. Walker and produced by Mr. Berry Gordy former CEO of MOTOWN Records! Therefore, it seem like Von B. and DL Wilson has it in their DNA to press towards their musical goals, with a passion! We write our own lyrics arrange our own lead and background vocals and we are self-published. Our history goes back ‘like a good perm’ (laughs)… Our creativity, motivation and love for music is what kept our fire a blaze all these years! We want to be a household name to our Urban/R&B/Soul music genre. We hope that our fan base continue to grow with support and that the powers that be allow ‘good music’ to be a priority again instead of what is just ‘popular’. Von B. and DL Wilson will be ready regardless!
Follow Von B. & DL Wilson:
Posted by Terrance at October 20, 2018