An Interview with Joyce Irby of Klymaxx 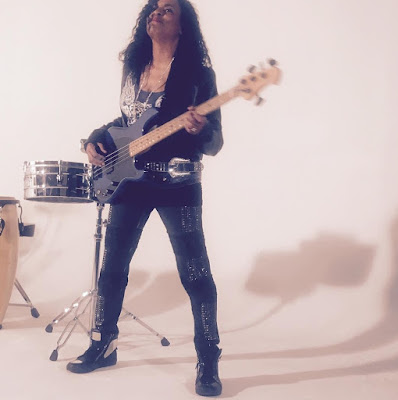 Since Klymaxx’s 1981 debut album, Never Underestimate the Power of a Woman, they have shown no signs of slowing down despite line-up changes and adversity both personally and professionally. Known for hits such as “I Miss You”, “Man Size Love”, “I’d Still Say Yes” and their signature classic women’s anthem “Meeting In the Ladies Room”, Klymaxx are back with a new single “Take U Back”. Original member, co-lead vocalist and bassist, Joyce Irby joins me to discuss all things Klymaxx.

Terrance - First can you briefly introduce to us to the current lineup of Klymaxx and their key roles in the band?

Joyce Irby - Yes, Regina Troupe on keys and lead vocals. Regina has performed live with the original Klymaxx for over 10 years and also tours with Peabo Bryson as a lead vocalist for duets. She is a fitness instructor and the tallest. Sheryl Harper on drums. Sheryl is a renown drummer in the Atlanta area and has toured with T Pain, Bobby Brown and many others. She also has had many movie roles including, The Fighting Temptations, First Sunday and Joyful Noise. Sheryl also toured with the original Klymaxx for a few years. Vanessa Izabella is an accomplished rock guitarist who also fronts her own rock band. Katarina Mia is a lead vocalist and percussionist. She owns one of Atlanta's favorite night spots, Kat's Cafe, in midtown.

Terrance - Was it strenuous choosing the ladies who you thought would fit?

Joyce Irby - Not at all, it just came together. As previously mentioned, two of the girls were with me already with the original Klymaxx. Vanessa & Kat were recommended and it was an immediate fit with good energy and temperament.

Terrance - Tell us about the new single “Take U Back” what inspired it and is there a release date.

Joyce Irby - Hopefully the release date is Friday May 6!! I knew we had to hit hard like we did with the Men All Pause back in the day. That was a track that I wrote and played the parts to. I sent some music over to our producer Wirlie Morris and asked him to give us something that hit hard and was not dated...and he killed it!!

Terrance - Is there also a new album in the works? If so, can you share the direction and sound it’s going in?

Joyce Irby - Yes, we are so excited about the album that's almost finished. We have a combination of things people know us for, hard driving synth bass, smart talking over nice beats, sensitive ballads, and a few twists thrown in!! We have elements of old and new blended together into a contemporary vibe that shows off all of us.

Terrance - A few years ago the former Klymaxx were the featured band on TVOne’s Unsung do you feel the taping was thoroughly explained in 41 minutes?

Joyce Irby - Lawd no!!! There are so many complexities and the show had to focus on what it thought was most important at the time.We could have been 3 seasons of "Diva's in Their Own Minds" if there was such a thing.

Terrance - Your work is often sampled by many of today’s contemporary Hip Hop artists like Fat Joe, Bone Thugs-N-Harmony, Kurupt, Big K.R.I.T. and so on what are your thoughts?

Joyce Irby - It’s good to have something that a younger artist thinks is worth borrowing.

Terrance - What was your initial reaction to the breakout song “I Miss You” when you heard it on the radio?

Joyce Irby - That one really caught all of us by surprise. Because it exposed us to a wider audience, it opened up other doors for us and that was incredible

Terrance -Do you think female bands are treated differently in the industry because they play their own instruments?

Joyce Irby - For me it was an advantage playing an instrument...especially a non traditional one like bass or drums. I used to stand outside venues when George Clinton (who is like my dad), Ohio Players, Bootsy, EWF, The Brothers Johnson, Mother’s Finest and Larry Graham came within 200 miles of my home in NC.  I would just be there with my bass strapped on and they would always get me in. When I showed guys I was serious about learning, I was treated like a musician and they were all nice to me...plus I was a teenager. I got to go to their rooms and sit on the bed and trade bass licks and learn from them. I sat with Louis Johnson, Wizard, Bootsy, Larry Graham and they all showed me stuff. George Clinton, saw me so much , he started introducing me to people as his daughter. He would let me come to his room after the show and listen to me play for about 5 minutes. He would encourage me and tell me how great I was going to be. He wouldn't let the other guys in until I was done, and then they couldn't wait to come in and party!! But George never let any of that happen around me..I love that dude!!!

Terrance - In the past 35 years since Klymaxx been in the industry is there certain memory that stands out from touring to collaborators?

Joyce Irby - Two big things....collaborators first. We were the first group that Jimmy Jam and Terry Lewis produced outside of the Time. They got kicked out of the group because they were working with us. We never had a big record with them, but we got to experience them when none of us had any hits, and they are the same now as they were back then. Prince called the studio one day to speak with them, and we all had to leave the control room. After they all talked for a while and we came back in, the tape machines stopped working and we thought there was something mystical going on. Pretty funny. Touring.....We opened up and did a whole tour with Kool & The Gang. We had water pistols that looked like tech 9 machine guns. They even had water clips in them. We would put on shower caps and run through the hotel ambushing each other. One time we had a massive water pistol ambush and shoot out right off the elevator in a Miami hotel. It was like a movie, the elevator comes to a stop. We are waiting quietly to ambush them and one of the guys dives out of the elevator, rolls on the floor while shooting up at us. We were shooting back and the poor people in the elevator were tripped out. The police came and told us to stop....we all retired our weapons....it was fun while it lasted!!!

Terrance- Is there a particular Klymaxx single you thought should’ve been pushed harder by the label?

Joyce Irby - Not really, I feel like they did a pretty good job with what we gave them.

Terrance - What’s the one Klymaxx song that gets the audience amped when performed live?

Terrance - Many may not know you discovered Dallas Austin what was it about him you knew was spectacular?

Joyce Irby - Dallas always used simple traditional chords and put great melodies on them. And he did drum rhythms that were a twist Teddy Riley's stuff and made it more hype. I knew immediately what he could do. It took me 2 years to convince anyone else at a label.

Terrance - Do you think Artist Development is missing in many artists today?

Joyce Irby - Totally!!! Not only that, but artists with depth are missing today!! There is a lot of young talent, but you can be famous for almost anything. And many people make a mockery of music. Every kid in middle school makes "beats", but that’s not necessarily the same as music. Sometimes there is not much to develop and when there is talent to develop, labels often don't want to risk the expenditure if they are not getting instant results. Dick Griffey and Solar records supported us through 2 albums that didn't sell, before we got to the one that was a break out for us.

Terrance - Who are some artists or bands in music you currently enjoy?

Terrance - What’s your take on digital music. Would you say it killed the record store and made music better accessibly?

Joyce Irby - Streaming in particular, is killing everything for songwriters.  In my opinion, it’s basically a license to steal. And yes music is better accessible if you want it for free. I believe, streaming contributes to a degrading quality of available music. I just don't want to talk about it. I don't know if we will be able to make another record if we can't get a sales support for this one.

Terrance - With a tremendous amount of experience in the business what advice or motivation would you give aspiring bands?

Joyce Irby - Do it only if you love it, and take pride in what you send out. If it’s something that you would do for free, and it’s your passion...then follow the voice inside that guides you and let it fill your heart!
Posted by Terrance at May 03, 2016